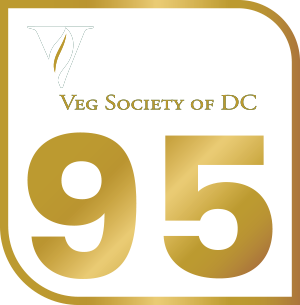 History of the Vegetarian Society of the District of Columbia

The history of the Vegetarian Society of the District of Columbia divides itself into two parts: before Madge and after Madge.  As I understand it, Madge Darneille first attended a VSDC meeting around 1968, though it consisted of quite elderly people and she wasn't much interested.  In 1972, though, she received a phone call telling her that she was one of four members and that if she wanted to take over the Society, she was welcome to, and otherwise it would be dissolved.

What happened in the first 40 years of the Society's existence?  In 1987 I researched this topic extensively and published quite a few details in the VSDC Newsletter for March-April 1988.  I will here summarize what I found.

The VSDC was founded on October 15, 1927.  It was heavily influenced by the Seventh-day Adventists (SDA's), who included many of the officers of the group: Harold Masters (a President); Stephen Curtis and Claude Melton (Vice-Presidents); and Ruby Cosing (a Treasurer).  However, there were two significant figures who were not SDA's: the founder, Milton Trenham, and one of his associates, William Mahoney.  Trenham and Mahoney were still members of the group in 1960; Trenham died sometime after 1963.

The VSDC underwent a name change in about 1956.  It became the "Tri-State Vegetarian Society" and then about 1966 reverted to the "Vegetarian Society of the District of Columbia."  The VSDC had 30 members in 1960, 66 members in 1963, and 45 members in 1966; but by 1972, there were only 4 members.  Why the sudden increase in 1963, followed by a sharp drop-off?  The increase was doubtless because of the founding of the American Vegan Society in 1960, which led to a "micro-revival" of vegetarianism as manifested by a doubling of membership in that time.  But there was an underlying problem with the VSDC: there were no young people coming up as new leaders.  The old leaders clung to their leadership posts and then gradually died off.

Because the same people who founded the group were still involved in 1960, the group probably had roughly the same composition and ideals in 1960 as in 1930.  In terms of ideals, both health and ethical concerns are quite apparent.  The mission statement of the VSDC in the 1960's was: "The mission of the Society is: promotion of better living by popularizing healthful and ethical vegetarianism, diet reform, natural agriculture, and abstinence from drugs and narcotics."  There was an emphasis on health largely from a natural hygiene standpoint, and an emphasis on temperance (William Mahoney was the head of a temperance organization).  The emphasis on ethics appealed to religion: one early VSDC pamphlet quotes the Biblical injunction "Thou shalt not kill," as well as quoting Isaiah 11:7 and 11:9.

About activities we know little.  There may have been potlucks, though I never found any specific references.

In 1972, the group was down to four members, of which Madge was one.  Madge became President, a number of young people got involved, and the group grew rapidly.  In 1976 the VSDC formally incorporated; the directors at that time were Jane Peters (the chairperson), Larry Miller, Bea Sayper, Dick Stafursky, Madge Darneille, and Jean Corbin.

The first vegetarian potluck I attended was in 1979, at Jane Peters' apartment.  Jane was the editor of the newsletter at the time.  She did an excellent job; she aspired to be a writer and published an article on Pritikin in Vegetarian Times.  The potluck attracted about 15 or 20 people, which was typical at that time and was considered a good turnout!  I heard people say we had about 150-200 members.  There was a great need for volunteers and anyone who sounded like they might be interested in helping out was almost immediately asked to join the Board of Directors.  I served on the Board for about a year at that time and then dropped out for a while.

It is hard to believe, but the founders or co-founders of three national vegetarian groups were at one time all members of the VSDC! (North American Vegetarian Society: Madge Darneille; Farm Animal Reform Movement: Alex Hershaft; Vegetarian Resource Group: Charles Stahler and Debra Wasserman.)  However, organizing the VSDC was most definitely NOT rocket science and we were all learning, usually the hard way.  I remember one Board meeting where one frustrated board member, without very much provocation at all, yelled an obscenity and walked out.  This did not happen at every board meeting, but it was the kind of thing we learned to live with.  The worst incident was before my time: the celebrated botched (and probably undemocratic) election of 1977. The election to the VSDC Board of Directors was lost by Alex Hershaft.  Most of the VSDC knew there were problems but no one dared mention them in public.

Dick Stafursky was never President but he guided much of the energy of the Society from the mid-70's to the early 1980's.  He was a colorful but sometimes controversial character.  Dick had several good ideas.  One was his idea about vegetarian starships: he thought that it was obvious that any future long-term space journeys which required any growing of food had to be vegetarian because that was the most efficient way to go.  He designed and printed up a T-shirt that said "Build Vegetarian Space Colonies." The most vivid memory I have of Dick is of him, Charles Stahler, and me leafleting the opening night of Star Trek in Washington, D. C.  We wore our "Build Vegetarian Space Colonies" T-shirts and I composed the leaflet.  We didn't get much response but we certainly had fun.  A second idea Dick had was the "Syndicated Vegetarian News."  We would keep track of vegetarian news (health news, animal rights, etc.) and distribute them as public service announcements to radio stations.  A few of them were read on local radio stations but the idea never caught on.

In 1980 Larry Miller became President.  He was a taxi driver and very up front about his vegetarianism.  His most celebrated editorial was one entitled "I'm a Kook" in which he said, in effect, that despite the fact that society thought vegetarianism was a little demented (thus, "kooky") that he was going to promote it aggressively anyway.  Some people used to make fun of his editorial--perhaps more than was deserved.  But it underscored a point which is difficult to understand now: even after Diet For A Small Planet, vegetarians were regarded as just one notch above residents of mental institutions in those days.

In 1984, after I had published my book A Vegetarian Sourcebook, I decided to get involved in the VSDC again.  My motivation was strictly social, and I wanted to stay clear of "vegetarian politics" which I would leave to others.

In January 1984, I was invited to speak to the VSDC.  On a cold January evening, I took the bus to the potluck location and gave my presentation to 16 brave souls (three people bought my book that evening).  This was still a typical turnout for the VSDC at this time.  I was sorry that more people couldn't come (I was hoping for 20 or 30) but was glad to get my message out.  Charles Stahler and Debra Wasserman came to this meeting, and I met George Johnson, a musician who would play for many VSDC events during the next four years, Claire Wilson who would soon do the newsletter, and Paul and Laura Kasko, who became eager volunteers for us.

I continued going to meetings.  The VSDC newsletter had called for nominees to the Board but I resolutely refused to think about participating.  No more politics for me!  But I was curious when the May issue of the newsletter contained nothing about the promised elections.  I questioned Madge about this and she told me that she was chagrined to say that no one had come forward at all to be a candidate!  She said she was desperate and that she was looking for volunteers, any volunteers.  So I volunteered and shortly thereafter found myself the Treasurer of the group.  Thus began my "rapid rise to power in the vegetarian movement," as I would later jokingly refer to what happened. Suddenly, I was one of the "leaders of the movement."

We had only 80 members at that time; undoubtedly we had actually lost members in the previous five years.  Madge was the President (again) and Claire Wilson was the newsletter editor. Many of the "stalwarts" of the VSDC were gone: Charles and Debra had gone to Baltimore, where they had started the Baltimore Vegetarians, sometime later to become the Vegetarian Resource Group.  Dick had left with his significant other to run a bed and breakfast in Delaware.

In those days we did not have personal computers.  The newsletter was typewritten, then cut and pasted.  The membership list was a card file and neatly typed and spaced names which were duplicated onto label paper at a copy shop; the labels were then put on the newsletters.  Another major bit of technology we did not have was VCRs.  We debated for a long time whether to buy the film "Vegetarian World" which cost us almost $500.  We finally bought it because we had the money and it seemed like a worthwhile film--and we didn't know that 10 years later the price would drop over 90%.  Of course, today you could buy the videos "Food Without Fear" or "Diet for a New America" for under $25.

We showed "Vegetarian World" around with some considerable effect.  On one occasion, we showed it at a library and got a complaint from a distraught mother who objected to the scene where someone shoots a cow with a rifle.  This was a pretty tame incident compared even to the mild scenes in "Food Without Fear" (which appeared years later), much less the gruesome slaughterhouse videos PETA would circulate.  Her daughter, under 10 years old, also saw the film and ran from the room crying and thereafter refused to eat meat.  Her mother complained about this and threatened to sue us, but we stood our ground.  Where did she think meat came from, and how long was she going to hide these facts from her daughter?  As a precaution, though, we issued our version of a "parental guidance suggested" warning before each subsequent showing.

By 1985 Claire Wilson, who was doing the newsletter, had dropped out and I became newsletter editor.  Then in 1986 Madge cleverly maneuvered me into the position of President.  The cleverness did not lie in waylaying any "opposition" but in persuading me to take the job!  For a short time I had three offices--President, Newsletter Editor, and Treasurer--but I did manage to convince Mary McBride to take over the Treasurer position.

In 1987 I counted my spare change and finally took the plunge and bought a PC.  It was primitive by today's standards, but it did enable me to do word processing and automate the membership list.  The newsletter was typeset, which was a big improvement because it looked (gasp!) professional.  By this time, every newsletter was at least eight pages long.

The big event of each year was the Thanksgiving Potluck. This attracted at least 100 people during the mid-80's.  But we were doing more than potlucks.  We became increasingly interested in "outreach" activities, and tabling became a more frequent activity--we found we would do perhaps a half-dozen tabling events each year.  It greatly helped our morale and membership.  In 1988 the big event was a talk to the VSDC by John McDougall in April, who had written two best-selling books at that time.  We spent over $2000 on this event, making most of it back, and attracted well over 150 people.  By late August 1988, just a few months before I left, we had 264 members, so our membership had more than tripled in just four years.

I left on November 20, 1988, for Colorado, to marry Kate Lawrence--and also to help out the Vegetarian Society of Colorado, where I served as Treasurer and later as President. The VSDC has since gone on to even bigger and better things, but that is how we got through the first 61 years of our existence.